Corruption revelations have swept Latin America. The most famous and far reaching came from Brazil, where engineering and construction giant Odebrecht exported a system of bribes and kickbacks that ensnared the region. However, most individual countries have had their own homegrown cases. From allegations of narco political funding in Ecuador to fancy houses for the Mexican president. What’s linked all these cases is a new public pressure to punish the guilty that, if it hasn’t led to enough prosecutions, has definitely led to them being shamed in a region where the corrupt used to walk with brazen impunity.

Guatemala has been a pivotal player Latin America’s anti-corruption fight. If you want to view it negatively that’s because Guatemala’s a very corrupt place– indeed Transparency International ranks it 143 out of 180 countries. Or, if you’re more of a glass half full person, then it’s because Guatemala has taken the most radical measures against corruption. It’s the only Latin American country where a sitting President was forced out of office for graft and that was prepared to import foreign judges to try local elites. But, however you choose to view the matter, it’s clear that Guatemala is a useful case study for Latin American corruption. 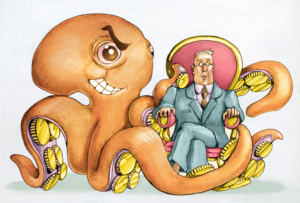 Corruption has spread its tentacles across the region

Investors now looking at entering Guatemala, or indeed the rest of the region, are faced with a tricky task. How do you do clean business in a country where top-ranking political and business elites have been caught up in the scandal? Hopefully for most LatAm INVESTOR readers this is a moral issue, where they don’t want to be corrupt. But even if we are more cynical it’s also a huge public relations challenge. Being linked to drug money isn’t a great look for a UK institution – just ask HSBC. Finally, there is the legal aspect. The 2010 Bribery Act is a strong piece of legislation can punish corrupt UK nationals or representatives of UK firms regardless of where the corruption took place.

Prevention is better than cure

The first, vital step is to make sure that you know what you’re getting into, says Peter Snell, Director of Centurion Security, a British security and risk management firm that operates in Guatemala. “When planning any project, the first phase should always be a feasibility study and a thorough due diligence to help you understand the intricacies of the market you are entering. Guatemala is hailed as having great opportunities, but there are a lot of risks, mainly due to the corruption and the lack of accountability.” When investors scent a good deal, they can be forgiven for wanting to push ahead but Snell warns that rushing for a quick buck early can be expensive later on.

One astounding statistic says it all: “98% of all types of crime go unpunished, therefore it is really important that you invest in the initial phases to ensure you protect your investment from the start.” Basically, if you become the victim of a fraud in Guatemala you’re unlikely to get your money back.

As a standard policy many international investors partner the oldest law firm or biggest player in a particular sector to gain credibility in the local market but Snell warns that doesn’t work in Guatemala. “We recommend that a thorough due diligence is carried out on any potential partner, no matter how established they may look there is no guarantee that they have not acquired such status through nefarious means. We are able to carry out a thorough due diligence and feasibility study on any potential investment providing tangible evidence via our internal legal department and investigations department, this should be done at the earliest stage possible.”

But all of these cautions shouldn’t dissuade brave investors from seeking out the opportunities because Guatemala is also home to its fair share of serious, ethical companies. Take Cementos Progreso, for example. A family-owned cement maker that’s more than 100 years old, Progreso has become a billion-dollar company without getting caught up in corruption. It’s just one example of the thousands of transparently-run firms across the region and an interesting case study of how investors can make money cleanly in Latin America.

Not content with merely following the law, Cementos Progeso created its own internal code of conduct, explains CEO Jose Raul González. “Our Code of Values, Ethics and Conduct (COVEC) applies to all individuals who work within our organisation. We all are meant to comply with COVEC because every day we are meant to be better workers, better citizens, and better leaders. We all sign a commitment to follow it strictly and there are consequences and penalties if we don’t. Strict compliance with this code is responsibility of all the members of the organisation.”

OK – so lots of companies might have some fancy values written on their website but that’s doesn’t mean that their employees, or even the management, follow them. The key, says González, is to enforce it and punish any breaches of conduct. “We cannot guarantee that any member of our organisation will behave perfectly. The only thing that we can guarantee is that all of us will have the proper training and tools to behave according to our COVEC and if someone makes a mistake he or she will be held accountable according to a due process. Last year, eight people had to be dismissed for behavior incompatible with our COVEC.”

In addition to internal procedures, both Snell and González agree that there are international standards, initiatives and laws that can improve transparency. González highlights United Nations Standards for the adjudication of government construction projects and the ‘anti corruption’ ISO 37001. Snell believes Centurion’s investment in international certifications such as ISO 18788, 9001 and the ASIS/ANSI PSC-1:2012 have improved the firm’s internal management. Moreover, Snell notes that the 2010 Bribery Act means that UK businesses can’t afford to be complacent.

González is keen to stress that there are many clean players in the Guatemalan business world, noting that elements of the private sector had been advocating for tougher corruption rules long before the recent scandals broke. However, he agrees with Snell that preparation is crucial. “There are a few simple steps that should be taken to avoid getting entangled. Obviously, the due diligence is key, and not just in the legal, fiscal, regulatory or accounting areas.  I think it is also important to look at the political situation, get the context of what is happening in the country and “talk” to people from different sectors and different walks of life.”

There are also some institutional tools at your disposal in Guatemala, says Snell, a former member of the British special forces. “The Registro Mercantile holds all the records of legally registered companies. A lawyer has the power to request copies of any legal documents that refer to a registered company, which for example will tell you who the registered owners are, who the legal representative is and you can verify that the company is legally registered to provide the service you are requesting.”

If Guatemala’s a microcosm of corruption in Latin America then it’s clear it shouldn’t put investors off the region. Clearly it adds cost to your investment, as thorough due diligence is needed at the beginning and strong internal control thereafter. However, the success of companies like Cementos Progreso shows that Guatemala can be a profitable country for transparent businesses.

We are the UK’s only Latin America-focused investment magazine.

Subscribe to our free newsletter and stay up-to-date on business & investment trends in Latin America.

We are committed to protecting your privacy and the confidentiality of your information.